Apps for smartphones are so varied and wide ranging anyone can find something they like. Plus, the technology of today is so amazing, (especially coming from someone who remembers the Commodore 64 and Beta tapes), these apps offer a dizzying amount of features and incredible visuals.

For a musician like myself there are some great apps for iPhones and Androids (like my smartphone, the Fender MyTouch3G). Most are music players (mp3, WAV files, etc.) the remaining a mix of guitar tuners, monophonic “pianos” and ringtone makers. The real drool worthy apps though are the ones that allow the user to create new music. iPhone’s iTune App Store has had a few step sequencers and even a four track recorder application, but the late blooming Android AppMarket , with a few exceptions, has been pretty limited to drum machines.

Until the excellent uLoops app was released in January of this year, I didn’t see much hope for a legitimate music “studio in a phone” app. Happily, with a year full of updates and improvements under it’s belt, uLoops fits the bill and is easily my favorite Android app. Period. 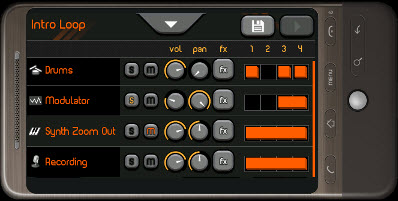 The mixer section of the uLoops App for Android.

A step sequencer with the ability to record vocals and other instruments through the phone’s mic, this little powerhouse can turn out kickin’  jams with some talent and a few recording skills. I recorded my first song on it in 30 minutes or less (listen to “Livin’ It Up at http://uloops.net/bank/4461029). The uLoops website is also home to an online community that shares their tracks and loops while giving each other advice on the program. It’s so cool to have other musicians to bounce ideas off of and have help when stumped with the App’s many features.

I can’t think of anything better than to build up drum grooves or even song demos while waiting in line somewhere, in an office waiting room or stuck in traffic, etc.  Just to be able to chill on the couch and turn out a funky rhythm is cool! Download this App if you’re a musician and even if you’re not. You might be suprised how much time has flown by why you were mixing a new track…all on a cellphone.  Be cool…JRSIV